During a segment featuring psychic Peter Antoniou, TV's highest paid actress was asked by the contestant to hand her ring over to fellow judge Simon Cowell, who would soon hide the ring within one of 1,000 identical ring boxes scattered upon the furniture and floor of the AGT green room.

Even though Vergara did not see where Cowell hid the ring, Antoniou asked her to think about the memory attached to ring so she could psychically guide him to it.

It took Antoniou about 70 seconds to hone in on his target and pick a ring box from the floor.

"How confident are you that I am holding the ring," Antoniou asked Vergara.

"Like zero," she said. “There’s no way you know that that’s there.”

Then Antoniou opened the box, and there was her ring.

But, then there was more. Somehow, Antoniou knew much more about the circumstances surrounding Joe Manganiello's proposal to Vergara in Hawaii on Christmas Eve of 2014.

“When you were proposed [to], you weren’t at home were you? You were somewhere else, you were far away,” Antoniou said. “And the plans had to change for your engagement.”

Vergara confirmed that Manganiello originally wanted to propose on the beach, but changed his mind at the last moment. Instead, the proposal took place in their hotel suite.

Antoniou then revealed a detail that had never been revealed to the media — that after Manganiello got down on one knee, she looked up and there was a rainbow.

A stunned Vergara explained, "He was gonna propose by the ocean, but then he panicked, and he came upstairs to the room and proposed to me in the room. And then suddenly he gave me the ring, and I look up, and there was a rainbow. It was beautiful."

"I want to say that there’s no way that you knew that about a rainbow, because no one knows that," she said. "Like, that story has not been on the press or nothing. So that was amazing."

Manganiello had previously dished about his proposal and the ring in an interview with Haute Living in 2015: “Our first date was in June [2014], and then I proposed to her on Christmas Eve. We had this big bay window [that I opened up], and the sun was going down pink over the mountains and over the bay, and I had this ring. I had looked at every ring in the world, and this is the ring that I wanted. I had a whole speech prepared in Spanish. I proposed to her on one knee in Spanish with the sun going down. It was awesome.”

Interestingly, the couple's rainbow detail didn't make it into the Haute Living story.

At the 2015 SAG Awards, Vergara showed off her new ring using the E! News Mani Cam.

“This is the love hand,” she exclaimed as she slipped her left hand in a tiny set that looks like a red carpet runway. E! News used the box to get neat close-ups of celebrity jewelry and manicures.

Vergara and Manganiello have been married since November 2015.

Antoniou ended up earning four yeses from the judges. The complete AGT segment can be viewed below. Antoniou focuses on Vergara's engagement ring, starting at the 3:55 mark. 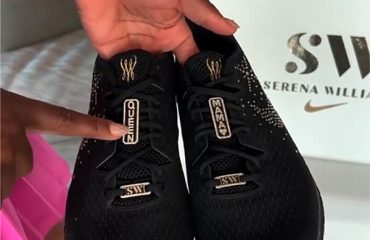