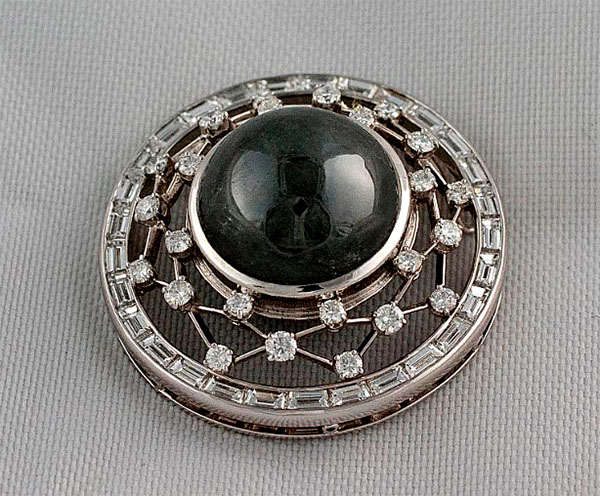 This Cabochon-Cut Black Diamond Masquerades as a Tahitian Pearl

The Smithsonian's National Gem Collection in Washington, DC, features an unusual cabochon-cut black diamond that masquerades as a Tahitian pearl.

Named the "Winston Adamantine Pearl," the 44-carat domed diamond presents the lustrous beauty of a pearl while maintaining the unique properties of a diamond.

The adjective "adamantine" is derived from "adamas," the Ancient Greek word for diamond. An item that mimics the hardness or scintillating nature of a diamond may be described as adamantine.

Cut from a rough diamond that was approximately 150 carats in size, the Winston Adamantine Pearl is bezel set in a platinum pendant that resembles a spiderweb. Fifty-two baguette and round brilliant-cut diamonds adorn the interlocking web and outer rim of the pendant.

While it's common to find opal, turquoise, onyx, moonstone and star sapphires cut with a highly polished rounded top, diamonds are almost exclusively faceted to show off that particular gem's unmatched refractive properties.

Black diamonds owe their color to numerous dark inclusions, such as graphite, pyrite or hematite, that extend throughout the stone, according to the Gemological Institute of America. Their opaqueness is caused by a “polycrystalline” structure that inhibits the reflection of light.

This is likely why the luxury jeweler Harry Winston decided to go with the cabochon cut.

Harry Winston donated the pendant to the Smithsonian in 1997 during the dedication of the Harry Winston Gallery, one of eight exhibit areas in the then-renovated Janet Annenberg Hooker Hall of Geology, Gems and Minerals at the National Museum of Natural History.

While the Winston Adamantine Pearl and a Tahitian pearl may look very similar, their hardnesses vary widely, with the diamond rating a perfect 10 on the Mohs scale and the pearl occupying the lower end of the spectrum with a Mohs rating of 2.5 – 4.5.

Known for their large sizes (8mm to 18mm) and rich iridescent colors that can include black, grey and brown with overtones of blue, green, purple or pink, the highly coveted Tahitian cultured pearls are cultivated in the waters of French Polynesia. 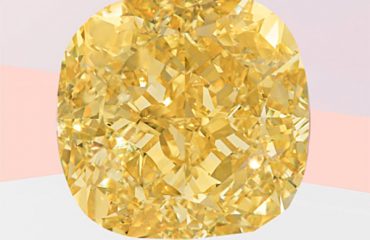 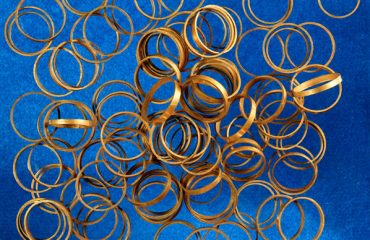 Music Friday: Kylie Minogue ‘Shines On and On and On’ in 2007’s ‘White Diamond’